Brian James Morris[1] is a molecular biologist and retired professor of molecular medical sciences at the University of Sydney, Australia.[2][3] He is an avid circumcision advocate,[4] who's never heard an argument for circumcision he didn't like.[5] He's the most vocal Australian circumcision promoter, stating that circumcision should be mandatory,[6] and uses regular scare tactics in an attempt to frighten parents into circumcising their children.[7]

Morris is in regular contact with Jake H. Waskett,[14] who was the number one Wikipedia editor of any articles on circumcision, or are even somewhat related to circumcision.[15]

Brian Morris was born in South Australia in 1950. In accordance with the then prevailing standard practice, he received a medically unnecessary, non-therapeutic circumcision.[16] It was not the practice to use anaesthesia or analgesic at that time because doctors then falsely believed that infants could not feel pain.[17] Infant circumcision has been shown to be traumatic in many cases.[18][19] The extent of little Brian's trauma, if any, is not known.

Brian Morris may be considered to be a victim of circumcision.

Brian Morris tried to use his status as a professor at the University of Sydney to pressure the university to sack Dr. Karl S. Kruszelnicki, from his position as Julius Sumner Miller Fellow in the School of Physics.[20] As a popular science writer, Dr. Kruszelnicki published an article in Sydney Morning Herald Good Weekend publication, titled "May the foreskin be with you,"[21] prompting a fierce attack from Brian Morris. Firstly, Morris tried writing in response to the article.[22]

In addition to writing a letter to the newspaper, and trying to get the University of Sydney to sack Dr Kruszelnicki from his position, Morris also filed a formal complaint of bias against the Sydney Morning Herald with the Australian Press Council.[24] These efforts were not successful, however, and the press council dismissed his complaint.[25]

In 2011, Morten Frisch, an MD, PhD and Doctor of Medicine, a professor of sexual health epidemiology at Statens Serum Institut in Copenhagen and at Aalborg University in Denmark, published a study, which showed an excess of orgasm difficulties in circumcised men, as well as significantly increased frequencies of orgasm difficulties, pain during intercource and a sense of incomplete sexual needs fulfillment in women with circumcised spouses.[26]

This study was preceded by three other publications based on the same dataset, dealing with sexual dysfunctions in Danish men and women in relation to socioeconomic factors, health factors and lifestyle factors, respectively, which were swimmingly published without serious criticisms from peer reviewers in the two most prestigious US journals of sexual health, the Journal of Sexual Medicine and Archives of Sexual Behavior. After adding the variable of male circumcision status to the analysis, however, the study was met with extremely critical reviews of everything about the entire dataset.[27]

On the 26th of April, 2012, documents suddenly disappeared from Brian Morris's website.[31] The documents were his leaflets promoting circumcision, bearing the imprint of the Gilgal Society.[10][9][8] Recently, the head of the Gilgal Society, Vernon Quaintance, has been convicted of possessing child pornography.[12][13] 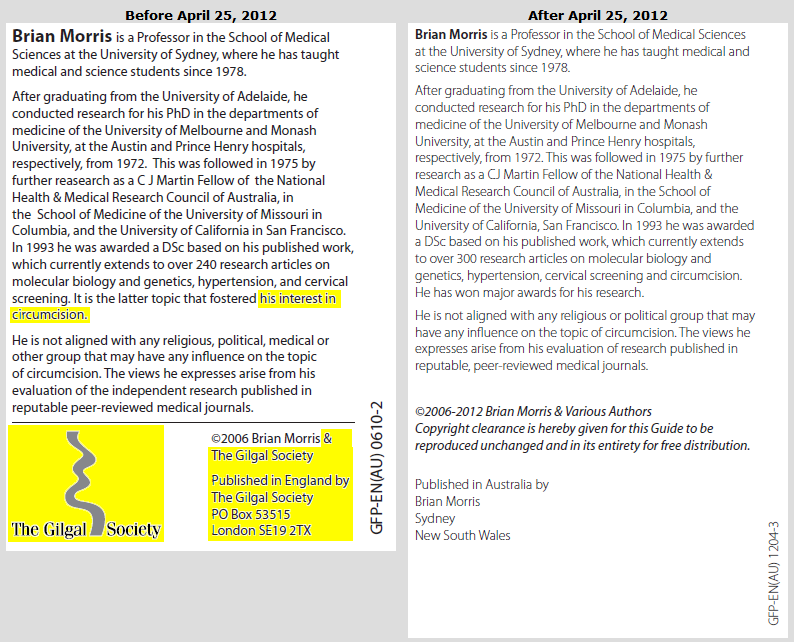 Morris's leaflet for women, "Sex and Circumcision: What every woman needs to know", which boasted a long list of co-authors—a virtual roll-call of the pro-circumcison movement—was removed and later replaced by a black and white version—again, with all reference to the Gilgal Society removed. Links to the Circumcision Foundation of Australia and the circumcision fetish site Circlist have been added. 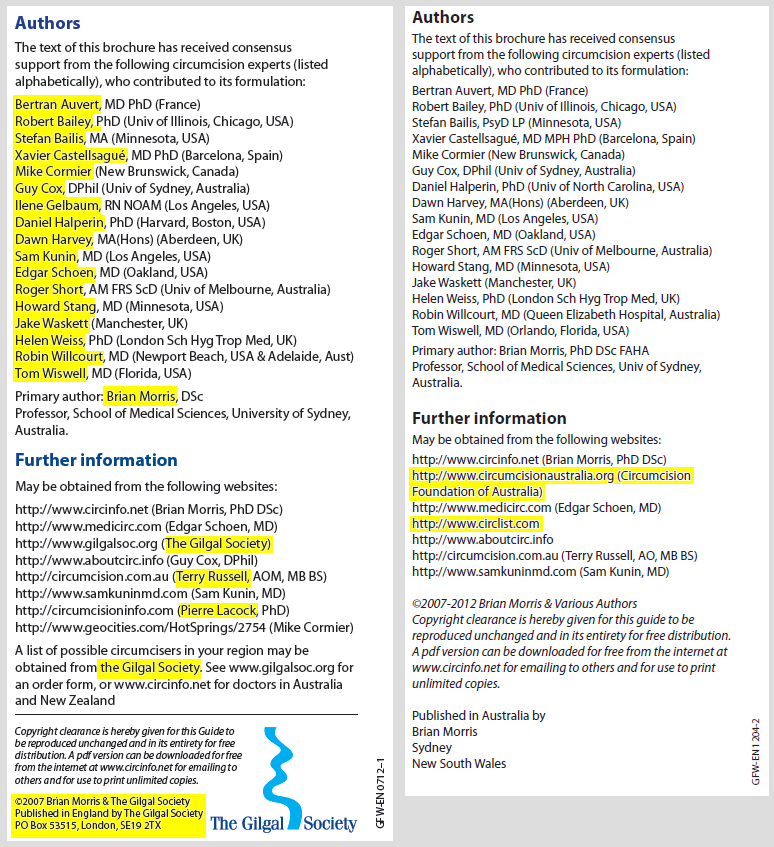 Since April 11th 2012 (the day Vernon Quaintance's court hearing was set, the Gilgal Society website has carried the message:
"We regret that as a result of major computer failure none of our publications are currently available to order from us." But Professor Morris's leaflets continue to be advertised on the site. 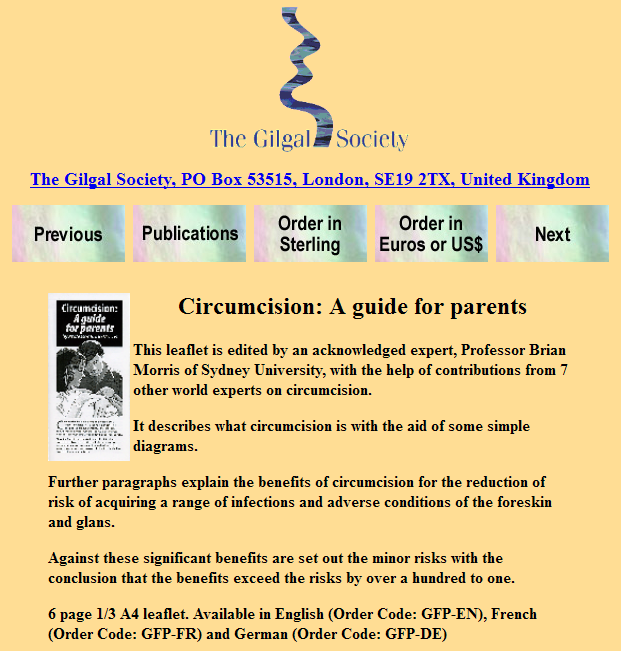 Morris's site continues to show a "circumcision humor" page, including a verse by Vernon Quaintance, directly under a picture of a baby with his foreskin trapped in a cellphone.[32]

Morris' website links to the following recommended websites and groups (8 of which are circumfetish sites, and 7 that sell devices to perform circumcisions):[34]

Morris' website also has a circumcision humor section, which contains jokes about children, and even a video called "Don't cha wish your boyfriend was circumcized?"[32] It also contains a picture of a naked child, with a folding cellphone clamped onto his foreskin, dangling from the end of his penis, on the humor section of his website.[55] It appears as if an adult purposely put the cell phone there and took the picture.

On several occasions Morris has called those against circumcision, foreskin fetishists. He sometimes cites a paper written in 1965 called "Foreskin fetishism and its relation to ego pathology in a male homosexual" (which links to Jake H. Waskett's website).[56][57] Waskett is homosexual.[58]

Does it make sense to have a fetish about a genital organ?

Some of Brian Morris' arguments for circumcision

In March of 2011, Morris published a paper in Am J Prev Med called "Circumcision denialism unfounded and unscientific." He had the paper co-authored by Daniel Halperin, Edgar J. Schoen, Stephen Moses, and others.[70]

In August of 2011, Morris published a paper called "Male Circumcision: An Appraisal of Current Instrumentation" with an editor of Circlist (a circumcision fetish group).[71]

The following was an email response from Morris, to an email citing two studies that claim to show female circumcision does not reduce sexual pleasure.[73][74]

Morris thinks circumcision should be required by law.[6] 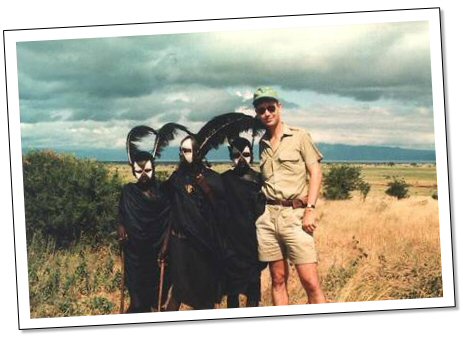 On March 7th 2011, a new user account by the name of Brianm signed up for Circleaks,[77] attempted to blank this page,[78] then successfully blanked the page entirely.[79] A few minutes later Brianm added Brian Morris' website (circinfo.net) to the page,[80] then added and removed edit=brianm.[81][82] At this point an Administrator reverted the removal,[83] and locked the page due to repeated attempts of removal without discussion.[84] A message was then posted on Brianm's talkpage, notifying the user that their removals have been reverted, that if a statement is shown to be false it will be removed, and that registering simply to delete content that's incriminating to someone isn't compatible with Circleaks wiki policies.[85] A Circleaks administrator checked the IP address of brianm and found the user to be in Australia, New South Wales, Sydney, University of Sydney.[86] Soon after brianm's edits, Brian Morris sent an email to his mailing list regarding this page.

The following was an email response from Morris to his mailing list on March 7th 2011, several hours after User:Brianm made an account,[87] and blanked this page.[88] 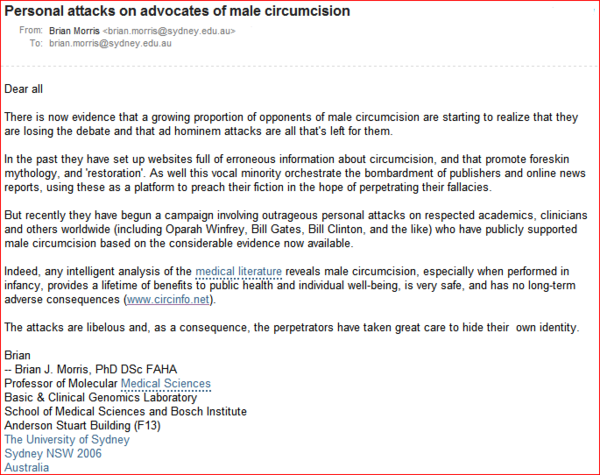 On March 8th 2011, Morris posted an almost identical message on a science blog at Science 20.[89]

Brian Morris, a native of Australia, has devoted his life to the promotion of circumcision and foreskin loss for all males everywhere, however, The Royal Australasian College of Physicians' official advice on circumcision rejects all of his claims.[90]