At the 2012 AAP National Conference & Exhibition in New Orleans, Dr. Yves Homsy presented conducted a workshop called "X4065 Pros & Cons of Doing Circumcisions". The session was described as follows: "This session aims to explain what one needs to do in order to set up a program to do neonatal circumcisions and how one can become an expert circumciser."[2] Screenshot[3]

While the abstract for the workshop described it as aiming "to explain what one needs to do in order to set up a program to do neonatal circumcisions and how one can become an expert circumciser," an attending physician by name of Daniel Flanders sent live Tweets from the workshop, relaying that the presentation was not going as described in the abstract. According to Flanders, "The lecture was not as described in the program. Focus was on medically necessary circ."[4]

According to Daniel Flanders, an attendee at the workshop described above, Yves Homsy told the audience that "Those who oppose circumcision are conveying an important message and their voices should be heard."[5] In a different tweet, Flanders posted: "My personal view: I thought he showed compassion for and acceptance of the intactivist message."[6]

According to participants, Homsy presented this slide during his session: 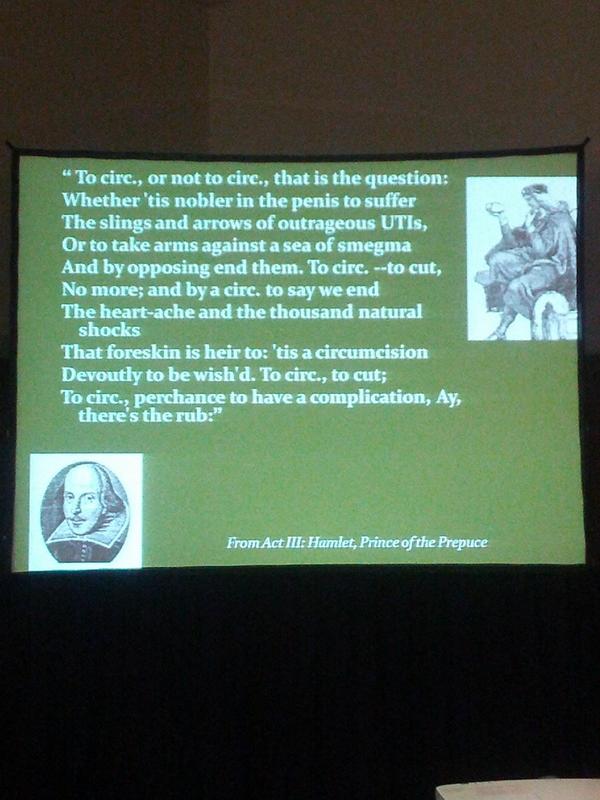 “To circ., or not to circ., that is the question:
Whether ‘tis nobler in the penis to suffer
The slings and arrows of outrageous UTIs,

Or to take arms against a sea of smegma
And by opposing end them. To circ. --to cut,
No more; and by a circ. To say we end
The heart-ache and the thousand natural shocks
That foreskin is heir to: ‘tis a circumcision
Devoutly to be wish’d. To circ., to cut;
To circ., perchance to have a complication, Ay, there’s the rub:”

On June 2005, a male child less than a month old was admitted to St. Joseph's Hospital in Tampa to undergo surgery to correct a severe left ureteroplevic junction obstruction. Dr. Homsy performed a left pyeloplasty (surgical reconstruction of the kidney pelvis). During the surgery, the Respondent attempted to place a left double-J internal ureteral stent into the ureter for post-operative drainage, but he was unable to place it due to the child's size and had to place an external draining system (Kidney Internal Stenting System). Days later the catheter was removed.

Section 456.072(1)(aa) Florida Statutes (2005) provides that performing or attempting to perform health care services on the wrong patient, a wrong-site procedure, a wrong procedure or an authorized procedure or a procedure that is medically unnecessary or otherwise unrelated to the patient's diagnosis or medical condition constitutes grounds for discipline by the Board of Medicine.

A $5,000 fine was imposed, 50 hours community service, 5 hours CME in risk management, 1 hour lecture on wrong-site surgery and a letter of concern. Dr. Homsy did not admit nor denied the allegations of the fact.[8] Archive:[9]