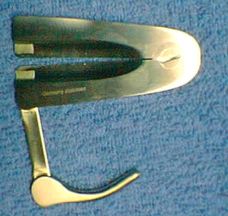 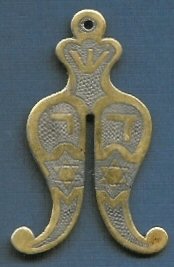 The Mogen clamp was invented in 1954[1] by a Rabbi Harry Bronstein.[2] It is actually one of many successors to the much older, traditional barzel device.[3] The Mogen clamp's name derives from the Hebrew word "magain," or shield, and it was invented in an effort to standardize circumcision equipment then in use by both doctors and mohels without medical training who perform the procedure in private homes and other locations.[2] The device is designed to "shield" the glans, as the name implies, while the mohel slices off the foreskin. A user must first rip the foreskin from the glans, then pull it through the clamp and slices it off with a single motion.[2] Some orthodox Jews only recognize circumcisions performed with devices based on the traditional design,[2] and for this reason it is preferred by traditional mohels.[2]

The Mogen clamp has a critical design flaw: It does not allow doctors or mohels to see what they are cutting.[2] As far back as August 2000, the U.S. Food and Drug Administration issued a public health notice about the Mogen and Gomco clamps[2] after receiving approximately 20 injury reports a year since 1996,[2] including lacerations, hemorrhaging, penile amputation and urethral damage.[2] Instead of recalling the devices, the FDA advised users to make sure they were using the clamps according to manufacturer's specifications.[2] In the 11 years following the FDA warnings, the agency had received 21 reports related to Mogen clamps, all but one of which involved injuries.[2] Mogen continued to publish in its instructional brochure that "no injury to the glans is possible, even after other glans amputations were reported.[4] Full or partial glans amputations have been reported for the Mogen clamp, even among experienced conductors of circumcision.[5][6]

Mogen went out of business in July of 2010[6] after losing a 10.8 million dollar law suit,[6] after a mohel[6] severed the end of a baby's glans[6] using one of their clamps. Mogen claimed that injury was impossible with its use.[6][4] The injury behind a prior lawsuit in Fulton County Superior Court had already put Mogen on notice about the danger of the device,[6] and they were already in default on a $7.5-million judgment in Massachusetts.[2]

In a different case, at South Fulton Medical Center, another law suit was won in 2009.[6] In that case, a child lost a third of his glans, and the plaintifs were awarded 2.3 million dollars.[6]

Mogen clamps were made by other manufacturers, including Miltex, which stopped distributing the devices in 1994.[2] Even then, Miltex's then-president Saul Kleinkramer defended the device, placing the blame on "possible mishandling" instead of the design of the device.[2] Despite having stopped distributing the devices in 1994, some Miltex manufactured Mogen clamps are still in use[2], and Miltex, along with their parent company, Integra Life Sciences Holding Corp., were recently involved (July 2011) in a $4.6-million settlement.[2] Miltex reached a confidential settlement with a North Hollywood couple for another Mogen-related circumcision botch in 2000.[2] In its response to the lawsuit, Integra maintained that the Mogen clamp was safe, carried adequate warnings and users should be held liable for any harm caused.[2]

Despite going out of business in America, and despite its notoriety for glans amputations, Mogen clamps are being used in a pilot project to have male children circumcised at birth under the pretext of HIV prevention.[7]