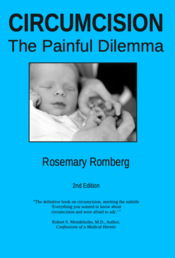 I did not start my research being anti-circumcision. I was even undecided over whether or not I would choose circumcision again should I ever have another son. I fully intended to write a book that was neutral on the subject. I had planned that this book would present the pros and cons of both choices, guiding parents to either direction as best suits their lifestyles.

These personal accounts, along with the facts I have uncovered, have led me to a strong stand against routine infant circumcision. If the facts supported cutting off the foreskins of infant males as a beneficial, justifiable operation, I would have presented that in this book. Instead, I have learned that none of the medical arguments for circumcision are justified, and while I believe that people’s religious beliefs require a certain degree of careful consideration and sensitivity, have found that the other so-called “social” reasons have little solid basis.